Here’s an item that emphasizes the importance of beginning PFLAG chapters in different countries to ensure that families with LGBT children have a way to express their support. 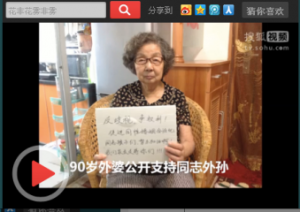 A 90-year-old grandmother  became an Internet hit in China after her video calling for equal rights for her gay grandson went viral. During the video she holds up a sign which says in Chinese, ‘we urge the legalization of same-sex marriages.’ The video was part of a PFLAG China project (Parents and Friends of Lesbians and Gays), emphasizing the important role that families have in supporting equality for LGBT citizens. View the video.